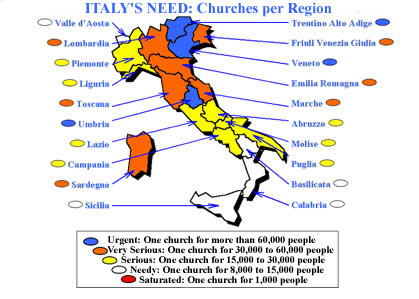 With over 60 million people, Italy has the fifth highest population within the countries of Europe.

Though many would claim to be religious, and most of them claim to be Christian, less then 1% claim to be evangelical, thus are trusting a works based salvation to get them to heaven.

The greatest need is for people to come and establish local evangelical churches. According to Patrick Johnstone, of Operation World, only 2000, of the 33,000 cities and villages have an established evangelical witness.

In Umbria there are 92 comuni (townships, akin to small counties).  To our knowledge, only a handful of them have established Evangelical churches.

This site uses Akismet to reduce spam. Learn how your comment data is processed.